To paraphrase Shakespeare: Something is rotten in the state of Maryland — and all over the Delmarva Peninsula. And it is so rotten that it is contaminating the air people breathe, the water they drink, and the region’s creeks and the bay.

The rot comes from major corporations’ industrialization of chicken production to maximize profits. Growers are induced to produce chickens as quickly and cheaply as possible and have succeeded with 570 million birds grown in 2020. Twelve slaughterhouses quickly slice the necks of 2 million of these chickens daily. The corporate sales of 4.2 billion pounds of meat, up 24% from 10 years ago, brought in $3.4 billion, up 47% since 2010. The chicken growers were paid 8.2% of the billions and out of this had to pay for the poults, feed, chicken houses, and other operating expenses including mortgages on the houses.

So, what’s so rotten? Chicken growers are left with 750 million pounds of manure each year and most is dumped untreated on their farms or other farms. The raw chicken manure contains nitrogen and phosphorus, the Chesapeake Bay’s major pollutants. They reach our waters through runoff and groundwater. Just imagine if a neighbor dumped a bucket of 5 pounds of human excrement in their yard next door — you would be outraged. 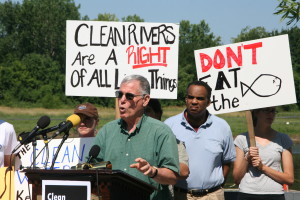 The rot we are experiencing from poultry operations also leads to serious human health problems, especially for nearby residents. Ammonia and other emissions, as well as groundwater nitrogen contamination, are linked to unusually high rates of cancer, gastrointestinal disease, Crohn’s disease, diarrhea, wheezing, and shortness of breath, and other ailments as documented in a study of 249 Shore residents.

The nitrate levels in some well water greatly exceed EPA safety limits and may lead to bladder and stomach cancer and brain tumors. In Wicomico County (home of Perdue), adult emergency room visits for asthma are double the state rate. People living near Pennsylvania poultry houses were 66% more likely to be diagnosed with pneumonia.

The rot extends to state regulatory agencies and legislatures as they fail to address one of the most serious pollution problems in the bay region. Due to this inaction, citizens fed up with this fowl play have taken to the courts or are pressing regulators to do so. And they are succeeding against the deep-pocketed industrialized chicken industry.

On March 11, a Montgomery County judge ruled that the Maryland Department of Environment must regulate ammonia from chicken and other large livestock operations as a water pollutant. Agribusiness and their extensive lobbying efforts have long blocked EPA and state efforts to regulate air contaminants from farm and livestock operations.

Unfortunately, Gov. Larry Hogan’s administration has chosen to appeal this case and so this ruling to protect people’s health and the bay has been delayed indefinitely.

On April 12, a Delaware Superior Court judge confirmed a settlement with Mountaire, the sixth-largest poultry company, in a case that went on for nearly four years. Mountaire agreed to pay $65 million to the plaintiffs in a class-action lawsuit led by an African-American couple in their 70s who lived near Mountaire’s large chicken slaughtering plant in Millsboro. They had been subject to stomach cramps, nausea, and diarrhea. They found a large pallet of bottled water on their porch from “friends at Mountaire” recommending they drink this water instead of their well water. High level of nitrates from the plant had contaminated their well water and they were exposed to ammonia and other emissions. More than 3,000 other residents have filed claims for damage to their health and/or contamination of their drinking water.

Mountaire sprayed billions of gallons of liquefied contaminated wastewater onto fields near the elderly couple which contained chicken guts, blood, feathers, bones, fats, whole chickens and other waste. The wastewater percolated into groundwater for nearly two decades. Mountaire also agreed in a parallel federal Clean Water Act case to spend $145 million to upgrade its slaughtering plant to meet regulatory requirements. Delaware regulators brought this latter case but plaintiffs in the class action case intervened to block Delaware from agreeing to a small fine and weak settlement.

On April 13, three Maryland environmental groups filed a notice of intent to sue Valley Proteins for violating its wastewater permit at its chicken waste plant in Linkwood, Dorchester County. The plant handles similar chicken wastes as the Mountaire plant but renders them into animal feed and biofuels for sale, discharging leftover wastewater. Its discharge permit expired in 2006 but the state allowed the company to continue to operate despite gross violations of the permit terms.

The plant releases illegally high levels of fecal coliform, nitrogen, phosphorus, and ammonia into the Transquaking River which flows into Blackwater National Wildlife Refuge. The plant also may be contaminating groundwater. In the third quarter of 2020, the company exceeded its ammonia and nitrogen limits by 25 fold. If they do not come into compliance in 60 days, they can be sued and subjected to a penalty of up to $500,000. MDE approved a nearly $13 million grant to Valley Proteins — more than 80% of the cost to upgrade its wastewater system. This money is to be taken from the Bay Restoration Fund which has been used to upgrade government-operated sewage treatment plants to remove nitrogen and phosphorus. We all pay the Flush Tax on our water and sewer bills which have never been given to a for-profit corporation in 16 years of the Restoration Fund’s existence.

Conservationists saw this as an unjust reward for repeated long-term violations of the permit. Some legislators tried to eliminate the grant but Big Chicken still won again although Valley Proteins’ award was cut to $7.6 million. Responding to citizens’ concerns, Delaware’s environmental agency fined Perdue $84,600 in March 2018 for illegally discharging high amounts of nitrogen, ammonia and infectious bacteria from its Georgetown chicken slaughtering facility into a waterway flowing into the Broadkill River.

In June 2019, Delaware again fined Perdue for violations at is AgriRecycle chicken waste composting facility. The fine was $179,429 and involved Perdue obscuring lab reports on its compost chemical content and for filing incorrect data. The compost distributed contained excessive levels of chromium and fecal bacteria. Big Chicken continues its attack on the environment while these corporate giants and their lobbyists go after all who speak out. Using half-truths and distortions, the industry wrongly alleges that those who contest their actions want to put the small chicken farmers out of business.

I am hopeful that truth and environmental justice will one day prevail through the adoption of stronger regulations and rigorous enforcement of both new and existing regulations.

Global warming is real and presents an existential threat to the Earth and its inhabitants. Human activities are the major causative factor centered on fossil fuel burning and extraction, agricultural operations, and deforestation. Sea level rise caused by global warming is accelerating. Last year tied with 2016 as the warmest year on record. The last…… END_OF_DOCUMENT_TOKEN_TO_BE_REPLACED

We are blessed in this country with an abundant, healthy, and cheap food supply which few civilizations in history have attained. The Green Revolution ushered in huge increases in yield per acre as massive amounts of fertilizers, especially nitrogen, were applied as well as increases in pesticides. We produce so much food and fiber, that…… END_OF_DOCUMENT_TOKEN_TO_BE_REPLACED

Disturbing elements of CBF’s report card include an F for oyster recovery. This critical Bay keystone species has declined to 1% of historic levels inhibiting its ability to filter-cleanse Bay waters. Underwater grasses scored a D-. Along with oysters, their ecological functions make them the Bay’s Most Valuable Players, helping keep water clear and healthy by absorbing nutrients, trapping sediments, reducing erosion and acidity, adding oxygen, and providing essential habitat for crabs.… END_OF_DOCUMENT_TOKEN_TO_BE_REPLACED

Written by Gerald Winegrad, The destruction of the Chesapeake Bay ecosystem began more than 400 years ago with the clearing of forests and later, the filling and draining of wetlands. About 66% of our tidal and freshwater wetlands were destroyed, including thousands of acres drained with federal and state funds to create farmland. The Eastern Shore…… END_OF_DOCUMENT_TOKEN_TO_BE_REPLACED