Global warming is real and presents an existential threat to the Earth and its inhabitants. Human activities are the major causative factor centered on fossil fuel burning and extraction, agricultural operations, and deforestation. Sea level rise caused by global warming is accelerating. Last year tied with 2016 as the warmest year on record. The last seven years have been the warmest seven years on record, a dramatic warming trend.

While you often hear dire prognostications for the future, we are already experiencing substantial impacts.

The EPA Bay Program notes that the Chesapeake Bay is one of the most vulnerable regions in the nation to climate change. There are 11,684 miles of shoreline along the Bay, 533 of them in Anne Arundel County. Global warming is rapidly melting the polar ice caps and Greenland’s glaciers, raising sea level. As oceans and the bay warm, water expands adding to sea level rise. Land subsidence is sinking our bay shorelines leading to more flooding and erosion. Marshes disappear as does our land causing more siltation of the bay, smothering oysters, and disrupting photosynthesis of bay grasses.

Formerly, thick intertidal grasses protected 100% of Gerald Winegrad and neighbors’ bulkheads, providing bay critter habitat. No more as all you see here and that had been along the bulkhead have been wiped out by rising bay water–here Gerald holding a dead high-tide bush. (Courtesy of Carol Swan)\

Over the past century, bay waters have risen about one foot but are predicted to rise 2-3 feet in the next 30-40 years and by as much as 5 feet by 2100. Sea levels in Anne Arundel County have been rising about an inch every seven years. A 2018 study ranked Anne Arundel as one of the most vulnerable for home flooding among 63 counties in the mid-Atlantic region from New York to Virginia. This is due to our low-lying topography with few natural barriers to flooding. 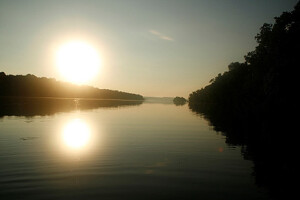 So, how is global warming affecting us? We need look no further than City Dock. A NOAA report found that Annapolis has experienced a 925% increase in average annual nuisance flooding events during the past 50 years, the greatest increase recorded for any U.S. city. A 2014 report from the Union of Concerned Scientists predicts that Annapolis will experience 200 annual flood days by 2030 and 350 by 2040. Businesses are affected, traffic is rerouted, and buildings are experiencing flood damage.

The City plans to raise City Dock by six feet and install pumps to pump flood waters from stormwater drains back into Spa Creek. These solutions will cost at least $50 million. Leading environmental scientists believe that this will exacerbate flooding in close-by Eastport. The Naval Academy also has increasingly serious flooding and is conducting an 18 month study to ascertain the best course to deal with the flooding.

So, how is global warming affecting us? We need look no further than City Dock. A NOAA report found that Annapolis has experienced a 925% increase in average annual nuisance flooding events during the past 50 years, the greatest increase recorded for any U.S. city. A 2014 report from the Union of Concerned Scientists predicts that Annapolis will experience 200 annual flood days by 2030 and 350 by 2040. Businesses are affected, traffic is rerouted, and buildings are experiencing flood damage.

The City plans to raise City Dock by six feet and install pumps to pump flood waters from stormwater drains back into Spa Creek. These solutions will cost at least $50 million. Leading environmental scientists believe that this will exacerbate flooding in close-by Eastport. The Naval Academy also has increasingly serious flooding and is conducting an 18 month study to ascertain the best course to deal with the flooding.

Even if you don’t go downtown or live on the water, consider that a 2.5 foot rise in water level means that an area of up to one mile inland could be subject to one foot of sea water where the topography is relatively flat. Few properties in the county could escape this flooding. Capital reporter Selene San Felice did a great job in her December global warming article detailing such effects on roads and properties.

She pointed to an analysis that found that 510 Anne Arundel County homes valued at a total of $320 million are at risk of annual flooding by 2050. She also noted that in October, the county announced a pilot program to buy flood-prone homes for conversion to flood mitigation projects, funded with $500,000 for a trial with one or two properties. This process is called abandonment which may become a common but costly tool to deal with sea level rise.

Dorchester County is a very scary case study where from 1938 to 2006, more than 5,000 acres of marshland disappeared at Blackwater National Wildlife Refuge due to sea level rise and subsidence. The former marsh is now open water. Marsh habitat supports two-thirds of fish species and blue crabs and provides erosion control. Unless we act forcibly, all of Blackwater will be lost to open water by 2100. Lest you think this doesn’t affect you, note that Zillow has concluded that by 2100, 64,000 existing Maryland properties in low-lying areas will be underwater at a cost of $20 billion unless sea level rise is dealt with. Property loss is already occurring as well as flooding and damage to roads.

Global warming has also led to an increase in and severity of destructive storm events including hurricanes and rainstorms. There were 30 tropical storms or hurricanes during the 2020 Atlantic Hurricane Season with 6 major hurricanes, making 2020 the most active hurricane season on record. More than 430 people lost their lives. Property damage was $53 billion. A storm with a one in 100 chance of occurring (like Isabel in 2003) now has a one in 10 chance by 2050.

Isabel wreaked havoc in this area with its destructive flooding causing $500 million in damage in Anne Arundel County and $5 billion coastwide. Homes on the bay were literally cut in half where I live in Oyster Harbor. Community piers were destroyed, streets flooded, and in Bay Ridge, the main road along the bay caved in. Heating oil tanks spewed out their contents and gave me a headache from the fumes where the oil floated in streets and into the bay. Well-heads were contaminated, car engines destroyed, and older homes inundated. My backyard was under 4 feet of water with fish swimming in it.

Central Maryland had 472 buildings and homes destroyed, and another 3,260 greatly damaged. Strong storm surges from the hurricane washed 43,000 tons of salt, millions of pounds of nitrogen and phosphorus, and millions of gallons of raw sewage into the bay. The odds are great there will be more Isabels in our future.

Heat waves are more intense and longer lasting and warming waters also threaten human health as higher temperatures increase algae and fuel the explosive growth and toxicity of dinoflagellates like pfiesteria and vibrio which can infect humans and even cause death. I have seen men’s legs being eaten away by these infections from bay water.

I could not even imagine that we could experience a blotting out of the sun in Maryland from a from massive west coast forest fires fueled by climate change. But in September, the jet stream carried the thick rusty-gray smoke from thousands of miles away to our skies. It was surreal like I was in a horror movie about environmental Armageddon. These fires caused $16 billion in property damage and $3 billion in fire suppression and burned more than 10 million acres, 28% greater than the size of Maryland.

Eel grass, the predominant bay submerged aquatic vegetation, is of vital importance as a nursery for crabs and fish, preventing erosion, and slurping-up nutrients. In 2005, elevated water temperatures caused a large-scale loss of eelgrass in Tangier Sound, the epi-center of the soft crab harvest. This important plant may be extirpated from the bay as it is at its southern limit.

I have seen 90 feet of intertidal vegetation wiped out at my and adjoining neighbors’ properties on Oyster Creek. These plants cannot withstand the sea water rise and died off over 23 years, exposing our bulkheads and sandy low-tide beaches to erosion and eliminating their nutrient uptake and habitat for bay critters.

Once abundant Black Rails and Saltmarsh Sparrows have been all but eliminated from disappearing marshes. Migratory bird patterns are changing, adversely affecting avian species who may arrive too early or late on breeding grounds to successfully reproduce and raise their young.

There are personal financial costs from global warming stoked weather events. My flood insurance has gone up 144% despite raising my deductible 5-fold. My homeowner’s insurance has risen rapidly tripling since Isabel even though I greatly increased the deductible to $3,000. Higher tides are busting out my pier boards which need repair or replacement.

To see what we are facing, I highly recommend viewing this excellent 2018 documentary, High Tide in Dorchester: video.mpt.tv/video/high-tide-in-dorchester-7ywhuy.